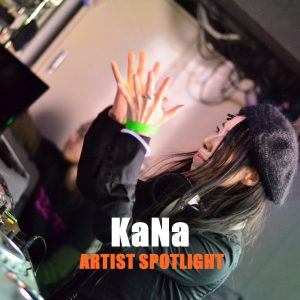 KaNa is a producer and DJ from Yokohama Japan.

When she was a child, KaNa was strongly influenced by classical music, and started to make music by using the piano. Since her teens, she has touched the synth. And through working as a keyboard player in a band, she decided to become a musician, and learned music theories and composing techniques.

While doing her keyboard activities, KaNa encountered dance music styles such as 80’s Hi-NRG, Eurobeat, Disco, Soul, and House by going to clubs. Soon after, she started her DJ activities. From that point on, she has experienced many many unknown music acts that cross generations and genres.

KaNa has produced her tracks by using hardware sequencer and analog equipment. In 2005, she changed her equipment to Macintosh, and come to produce in a seamless environment by using Logic. Just then, she ran into Progressive House by Probspot and Benz & MD. KaNa was fascinated by Progressive House and came to make it in her own style.

Since 2006, KaNa’s tracks have been spoken of favorably by labels and artists in Japan. Eventually she got production offers from Days Music (JP), Delights Music (JP), Landscape Music (JP) and Otographic Music (JP).

In 2010, she realized much-anticipated overseas releases from Arrival, Hungarian DJ producer Aeron Aether’s label. In addition, in the ‘Hiroyuki ODA – Thirty Remixes’ works which released on January 2011, she climbed to 9th place which is her highest record in the Beatport Trance chart.

KaNa’s sounds have happiness, danceable rhythms, and her unique taste that brings you both freshness and classical inspiration.
Increasingly, I can’t take my eyes off her activities in the future…!