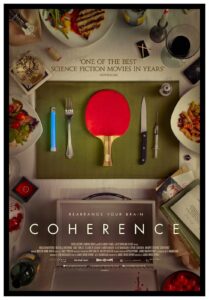 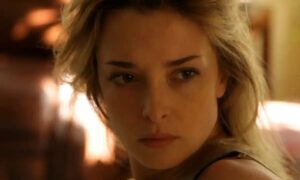 I’m watching eight friends attend a dinner party. It’s dark outside as they arrive, but after the casual chat in the brightly lit kitchen, the serving of drinks, and general banter in the living room some subtle indications of lingering tensions emerge. It’s nothing too serious – the usual little power games of ex-lovers and narcissistic friends.

The room goes black. They rustle around for torches and candles – in the process they find some blue glow sticks. Looking out in the street it appears the entire neighbourhood has had a blackout except for one house in the distance that still has it’s lights on.

I’m not at this event – this is the film Coherence (2013) and the dinner party takes place on the same night as a comet is due to be passing close to earth. There have been warnings that there may be some interruptions to power and phone services. They venture from the safe zone of the house into the street clutching their blue glow sticks.

The song that cannot be beaten:

Everyone who has ever written a song or a track knows the one tune that cannot be beaten. It shines in the distance – you can see clearly where to head creatively, you get there eventually and find you needed to be back where you were, you need to undo everything you’ve done – but somehow everything you’ve tried is still in your mind each with an endless amount of new possibilities – some bits work, some don’t.

Clutching your imaginary blue glow stick to light the path ahead like Crash Bandicoot running after a firefly you strip out all the bits that don’t work and you find that the bits that were working now only seem to be working because they were deceptively sounding good because what they were next to were crap. As it goes dark you cling onto the one memory of the original idea you liked and start rebuilding but the idea vanishes again. You start to explore a myriad of new possibilities and after a while you can see clearly that the idea is a ‘bad idea’ – sent like a bad spirit to lead you to despair – similar to the concept of the ‘bad miracle’ in the film ‘Nope’ (perhaps).

The appeal of the ‘bad idea’ is that there are just enough good elements to make you believe you can make it work. Plus – since it was your idea how can it really be bad? And then you are hooked again. It’s not writer’s block – you are writing a ridiculous amount of stuff – just without a satisfying result. The only escape is to abandon the whole thing.

A songwriting Rubik’s cube with no solution

If you like films that play a bit like a Rubik’s cube then perhaps you will love the feeling throughout Coherence of low level horror at realising the finite possibilities the characters are dealing with are spiralling out of control and we are dealing with infinity – wondering if at some point any of this could have been avoided – is there a start position to return to? But there is a much greater horror to be revealed – that you cannot return to where you began. 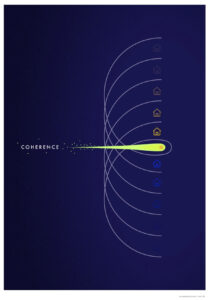 This is the point where you can go into a downward spiral or create a little magical escape act.

Here is my method – it almost always works (disclaimer: this may not work!)

Stop doing everything – you go for a walk – either outside – or just to the kitchen for coffee or whatever. The key is to do something mundane – empty the dishwasher – clean the stove – I don’t know – preferably something domestic.

Hum a random tune to yourself while you wait for the kettle to boil – ignore the kettle go back to the keyboard and play the tune you just hummed. It’s genius. Honest. Well – it often is an infinite improvement on what you were working on. It’s vital you don’t check messages before you get to your keyboard as the tune will vanish like smoke. Hitting record on the phone is fine as long as it’s quick or on a shortcut. What will be strange is how close the tune is to your original idea just infinitely better.

Perhaps there are infinite songs and finite solutions.

The film Coherence is like an exciting version of tedious television property programmes. There was a time where I unfortunately saw a lot of these shows. Couples are shown around the house by the presenter, lots of chit chat and discussions en route about all that each room is and what it could offer if modified.

Sometimes the programme was about finding a place in the country or in the sun or finding a dream home on a budget. They all follow the same formula – different people – different rooms but all reiterations of exactly the same thing.

The key idea both in Coherence and property programmes that mirror the creative process is this:

It’s tough picking the perfect house but it is out there. 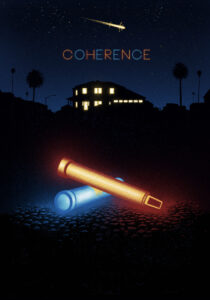 When you move into a house you mistakenly believe the only thing you have changed is the house. It might improve your life but your life is essentially the same but from a better location.

I would like to suggest that each house is a different potential future. A completely different reality. An entirely different series of events and choices in live will occur.

Yes, but what has this got to do with writing music?

At some point in composition the thought might enter your head – ‘I like everything apart from the baseline’ for example. But when you get the perfect baseline you must be prepared for one of two dramatic options.

1.  The baseline is genius but nothing else is.

2.  It’s so much better it’s unbelievable!  (this is, of course, preferable). Mind you the snares need work…

So the question is was it worth pushing further or were you already in the best position? As my tutor at college used to say ‘The art of a thing is knowing when to stop’.

That is where the creativity is. Given infinite creative tools your unique contribution is making finite decisions and keeping your mistakes. 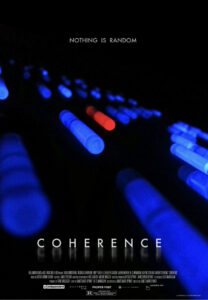